Far more physical effort went into performer Anna Martine Whitehead’s crossing of the studio space at DA + HC earlier that day. Prone below her, choreographer Onye Ozuzu (2016 CDF Lab Artist), also dean of the School of Fine and Performing Arts at Columbia College Chicago, pushed Whitehead’s reluctant feet forward using her shoulders. Each step required Ozuzu to reposition and reorient herself on the floor; even though Whitehead was hardly moving, Ozuzu could just barely keep up. In short order, Whitehead began to walk on top of Ozuzu’s body as it rolled over and over, her weight being borne by Ozuzu’s shoulders, lower back, inner thighs, and points between. Her palms on the floor, Ozuzu trembled as she lowered herself into a push-up position with Whitehead standing squarely on either side of her spine. This was the labor of movement being shown in an excerpt from Ozuzu’s Project Tool which, among many things, looks closely at the movement of manual labor. 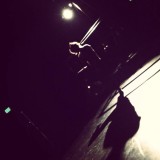 “Project Tool” and the Practicalities of Performance

Fall Dance: Onye Ozuzu picks up a hammer and gets back to fundamentals

Theme by Anders Norén — Up ↑